There is nothing worse than hearing:

“Stand up straight, or ” sit properly”, and “stop slouching!”

However sometimes it can’t be helped.

I did assume, like many generally do, that I was just being nagged and it wasn’t really a “big deal”.

Oh, how I was wrong!

I have learned that is this anything but the case.

Posture is one of the biggest causes of shoulder and neck pain today….

And when you realize just how easy it can be to rectify, you’ll be mind blown to think why don’t more people understand the importance of ‘good posture’.

The best way for me to explain this would be to give an example, close to heart, about my brother.

When I was still in physical therapy training, my brother rang me up complaining of a really bad shoulder pain and neck pain when he was running on the treadmill.

The pain would only come on after 5-10 minutes and would stop after a while, after he had stopped running.

Now my brother loves to keep fit, i.e. running, and going to the gym but he especially liked going to a weekly spinning class.

I’m sure you can imagine the position he would be in on the bike in this spinning class, he would be slumped over while pedaling.

I ended up spending some time with him trying to correct his position, keeping his back straight and shoulders high, and before he knew it, as if like magic his pain had disappeared.

Not by magic however, but by changing the dreadful position his body was put into each time he was working out. And that is how easy it was done.

Now don’t get me wrong, I joked on with him saying how clever I was and that I was the more superior of the family (which is in fact still true), but this is how easy it can be changed.

There is a few quick tips to help you spot your “bad posture” and how to improve on it.

Look at yourself in the mirror. (Remember there can be signs of poor posture before pain even occurs, so if you can spot the signs early, it is often easier to fix.)

Signs of poor posture include:

Now to improve your standing and walking posture “Think tall”, imagine a wire being pulled from the top of your head pulling you upward.

Another great tip I use myself is practice tightening your abdominal muscles and flattening your stomach. hold it this like for a few seconds, then relax, repeat this throughout the day.

When standing for long periods a lot of people tend to rest their weight predominantly on one foot. Try instead standby evenly balanced on both feet and if this proves tiring, then shift the weight from one foot to another regularly.

One of the most common causes of poor posture is desk work, on computers for long periods of time, which puts the back and shoulders into an unnatural position.

Try and take a break every 30 minutes and stand up during this break.

When sitting at a desk, lean forward at your hips, bringing your trunk forward, rather then bending at the waist or neck and try to keep your lower back pressed against the support of the chair.

This should really help improve you posture and prevent and problems from surfacing.

If you have anymore questions about the importance of posture, with shoulder and neck pain just ask and I’ll be more than happy to help. 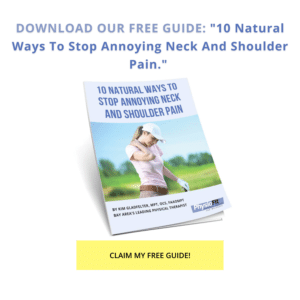 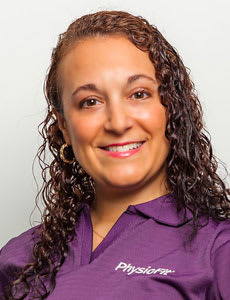 Kim Gladfelter is a physical therapist, Pilates instructor, educator, author, and co-founder of PhysioFit Physical Therapy & Wellness. She is known as a keen, well-rounded expert of healing through movement and women’s health specialist in the Silicon Valley area.

Kim has helped men and women of all ages to stay active and feel their best. She also writes about managing pain in her health columns, blogs and the local Los Altos Town Crier newspaper as well as reaches out to the local community, support groups, schools, libraries, and sports centers to advise and educate on body awareness and therapeutic exercise.

Send Us a Message!